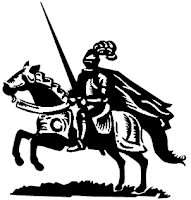 What is a knight?

A knight is courageous.

He protects the weak, deals swift justice to lawbreakers, and wages a war against evil.

A knight is venerable.

He has the strength to do what he believes is right, no matter the circumstances.

A knight is loyal.

He pledges his service to his Lord.

A knight is courteous.

He adheres to a strict code of honor and practices chivalry.

A knight is brave.

He defends his family, the poor, and his kingdom.

A knight is dedicated.

He works long hours and asks for nothing in return.

A knight is kind, dutiful, honest, selfless, courageous, and noble.

True knights did not pass with the coming of time and the onslaught of technology. They did not die out as candles in the night when empires rose and fell, nor when war and plagues ravished and remolded the earth. They did not fail when countries moved borders or changed leaders. They did not vanish when men no longer read their stories.

Saturday afternoon I got a call from my father-in-law telling me that my friend, Joshua Pratt Hooper, had been killed in a shooting range incident in Utah’s west desert. He leaves behind his wife of two and a half years and a loving family.

It’s ironic, since just last week my husband and I were talking about how Josh really is a modern-day knight. He is one of the best people I have ever known, and I am grateful to say that he was my friend.

I have no fears for Josh in the life beyond this one—if anyone was prepared to meet his Maker, it was Josh. Josh had no ill bone in his body. He never lost his temper, and he was always ready and willing to help anyone, even those he didn’t know.

He always gave me balloons when I visited him at work. 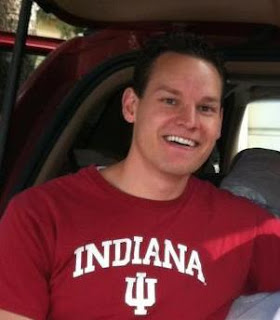 Josh served his fellow men for 24 years before his God called him back home. I can only begin to imagine what work the Lord has in store for him now.

Rest in peace, Joshua. Until we meet again.

My good blade carves the casques of men,
My tough lance thrusteth sure,
My strength is as the strength of ten
Because my heart is pure.

When down the stormy crescent goes,
A light before me swims,
Between dark stems the forest glows,
I hear a noise of hymns:
Then by some secret shrine I ride;
I hear a voice but none are there;

Three angels bear the holy Grail:
With folded feet, in stoles of white,
On sleeping wings they sail.
Ah, blessed vision! blood of God!
My spirit beats her mortal bars,
As down dark tides the glory slides,
And star-like mingles with the stars.

A maiden knight-to me is given
Such hope, I know not fear;
I yearn to breathe the airs of heaven
That often meet me here.
I muse on joy that will not cease,
Pure spaces clothed in living beams,
Pure lilies of eternal peace,
Whose odors haunt my dreams
And, stricken by an angel's hand,
This mortal armor that I wear,
This weight and size, this heart and eyes,
Are touch'd, are turn'd to finest air.

The clouds are broken in the sky,
And thro' the mountain-walls
A rolling organ-harmony
Swells up, and shakes and falls.
Then move the trees, the copses nod,
Wings flutter, voices hover clear:
'O just and faithful knight of God!
Ride on! the prize is near.'
So pass I hostel, hall, and grange;
By bridge and ford, by park and pale,
All-arm'd I ride, whate'er betide,
Until I find the holy Grail.