How Pregnancy Is a Lot Like Writing a Book

I have the wonderful opportunity to guest post over at Richard Ellis Preston Jr.'s blog today, where I talk about how pregnancy is a lot like writing a book. Please drop by and visit!

Clicky clicky!
Posted by Charlie N. Holmberg at 11:52 AM 0 comments

Back to the Starting Line

Sometimes your brain just shuts off a story despite months of planning it. The excitement nerve has been severed for Horizon Drop, at least for now. My husband is very sad about this. :O

SO I'm going to let Brain dabble in some other story construction (in part inspired by Daughter of Smoke and Bone by Laini Taylor), and when it's done over there we'll wipe up and get started on THE MATERIALS MAGICIAN. I need the first draft done before Baby arrives!

Ever started the race only to retrace your steps back to Start?
Posted by Charlie N. Holmberg at 2:50 PM 9 comments

Never Too Old for Costumes!

Have you planned out your Halloween costume yet? (Or your kids' costumes? Kid costumes always trump adult costumes. Especially baby costumes.)

Husband and I made a decent list of possible Halloween costumes to pull off--one of my favorites was for him to be a rainbow and for me (AKA the belly) to be a pot of gold, though I don't think I'm quite big enough to pull off a funny pregnancy costume. Alas.

We're 90% sure of our costumes now... but I'll post about that once we actually get them together. :) Not sure if it will top last year's ghosts or the "tree" costume of 2011. 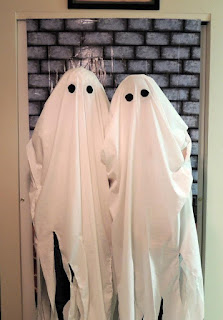 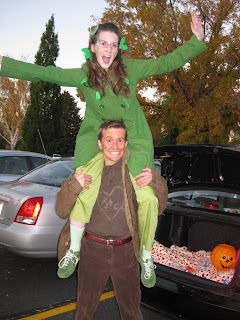 What are you dressing up as this year?
Posted by Charlie N. Holmberg at 11:13 AM 6 comments

I'm more of a summer gal myself, but I have to admit that autumn in norther Idaho is pretty. :) 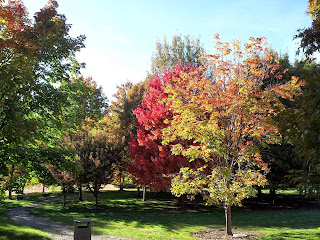 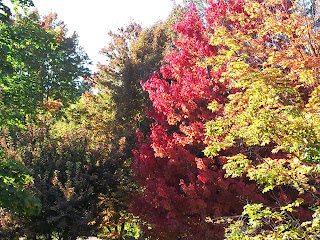 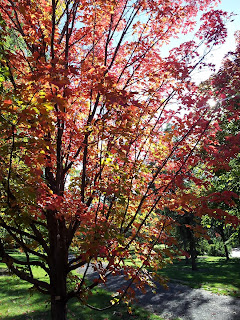 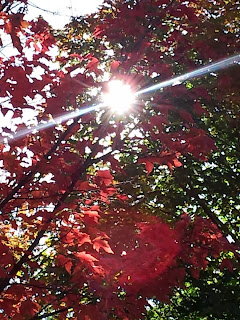 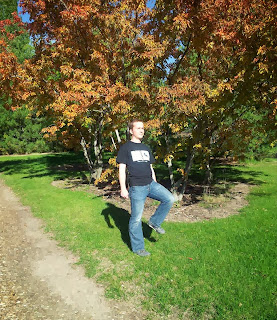 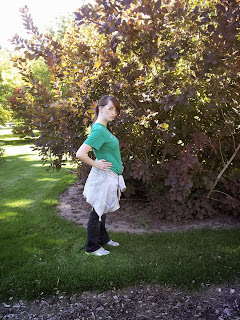 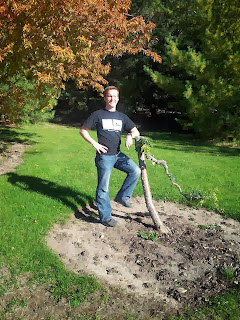 They say write what you know.

Others say that's boring and we should write what we don't know.

For my next WIP, HORIZON DROP, I am most definitely doing that. In fact, I have absolutely no knowledge whatsoever on my topic.

What is it? Seafaring. 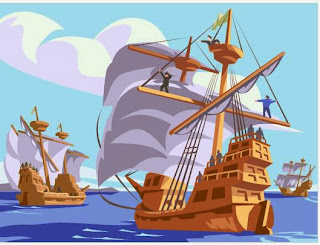 I've been reading books and pinning references and browsing nautical dictionaries, but there is so much to learn! Even with research, I know I'll be pausing dozens, if not hundreds, of times during the drafting process to look up a word or see how something-or-other works.

Not to mention I'm trying my hand at epic fantasy again. Epic fantasy is hard. My first five novels were epic fantasy, and they got me no where. (Did I mention I didn't start writing good books until I stopped writing epic? I feel like I should have one of those Insecure Writer group logos on here.) 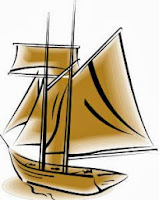 But I want to give it a try. And I love the ideas I have plastered all over my makeshift storyboard. I'm hoping it will be worth all the hours I'll have to pour into research so I don't sound like an idiot.**

So here goes. I'm planning on starting the novel by October 15th and finishing the first draft before Christmas (not having a day job does wonders for the word count). After that I have to gear up and get as much of The Materials Magician done before I pop out a baby.


What are you working on? Ever set yourself up to conquer something completely massive?

This app is hilarious.


It's called "Kegel Kat," and you guessed it... it's for kegels! (A must-have in every pregnant woman's repertoire. We don't want that urinary incontinence bug biting post-labor!)

I got the free version of this on Saturday, and it's hilarious. I mean, look at this cat's face:

You can do a record-setter program (which you can then share on social media!), a daily "workout," or you can kegel away to music, using those perineal muscles to keep the beat.

Ultimate win. I'll be pushing out that baby like a champ.

I'm over at Kate Danley's blog (read her interview on this blog here) this week talking about The Paper Magician.* Please stop by if you have the chance, and happy Friday!**

*I was told I could italicize that if I wanted. I'm like a real person now. :D

**Also, happy birthday to YA author Juliana Brandt!
Posted by Charlie N. Holmberg at 1:00 AM 0 comments

Email ThisBlogThis!Share to TwitterShare to FacebookShare to Pinterest
Links to this post
Labels: Interview, Kate Danley, The Paper Magician

I have the awesome opportunity to present the cover reveal for Crystal Collier's Moonless, a historical paranormal romance for young adults. The book will be released November 13th, but for now we'll have to settle for a sneak peek!

In the English society of 1768 where women are bred to marry, unattractive Alexia, just sixteen, believes she will end up alone. But on the county doorstep of a neighbor’s estate, she meets a man straight out of her nightmares, one whose blue eyes threaten to consume her whole world—especially later when she discovers him standing over her murdered host in the middle of the night.

Among the many things to change for her that evening are: her physical appearance—from ghastly to breathtaking, an epidemic of night terrors predicting the future, and the blue-eyed man’s unexpected infusion into her life. Not only do his appearances precede tragedies, but they’re echoed by the arrival of ravenous, black-robed wraiths on moonless nights.

Unable to decide whether he is one of these monsters or protecting her from them, she uncovers what her father has been concealing: truths about her own identity, about the blue-eyed man, and about love. After an attack close to home, Alexia realizes she cannot keep one foot in her old life and one in this new world. To protect her family she must either be sold into a loveless marriage, or escape with the man of her dreams and risk becoming one of the Soulless.

Crystal, author of MOONLESS, is a former composer/writer for Black Diamond
Productions. She can be found practicing her brother-induced ninja skills while teaching children or madly typing about fantastic and impossible creatures. She has lived from coast to coast and now calls Florida home with her creative husband, three littles, and “friend” (a.k.a. the zombie locked in her closet). Secretly, she dreams of world domination and a bottomless supply of cheese. You can find her on her blog and Facebook, or follow her on Twitter.

Interview with Author Kate Danley and Release of QUEEN MAB!

I have the great pleasure of interviewing Kate Danley, author of The Woodcutter, on the blog today! Kate's new novel, Queen Mab, is releasing TODAY--this is one you'll want to read about.

First and foremost, tell us about yourself and your publishing journey!

I've been writing since elementary school. It was always something I fell back on to blow off steam, but never really took seriously. The publishing world was impenetrable and I figured I had a better chance at becoming an Oscar award winning actress than getting a book published (I've been acting for the past twenty-five years, so that isn't hyperbole). In 2003, I was taking a horrible anatomy class and, in an effort to stave off the awfulness, I started writing The Woodcutter instead of taking notes. I shopped that book around for five years and received rejection letter after rejection letter after rejection letter. For five years. I knew it was good, but the doors were closed. It physically hurt to think that this particular story would die a quiet death on my hard drive, so in 2010, I decided to self-publish. It was the single most important decision I have ever made in my life. The Woodcutter did very well and I was approached by the wonderful people at 47North asking if I would consider partnering with them for a re-release. I am now what people consider a "hybrid author" with both indie and traditionally published titles.

Your novel, Queen Mab, is coming out October 1st. What’s the premise of the book?

In Romeo & Juliet, Mercutio has a monologue about Queen Mab. Now, scholars say that this speech was written purely as a performance opportunity for the original actor.  It has no bearing on the play.

But the more I study Shakespeare, the more I believe that every word is written for a reason.

So, I posed the question: What if Queen Mab was real and responsible for everything that happened to the Capulets and Montagues? I then took the text of Romeo & Juliet and wove it into a period story from Queen Mab's point of view, with her love for Mercutio at the heart of everything. 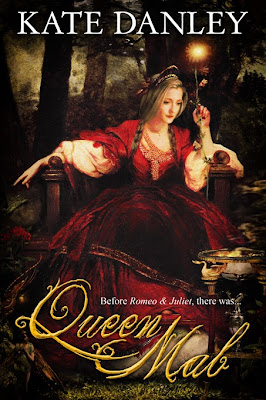 How did you get the idea for Queen Mab?

I saw a terrible film. It had a horrible plot and a horrible script, but it had this queen figure who intrigued me. I thought to myself, "Hmmm… I'd like to tell a story with her." Now, I thought this queen was very similar to Queen Mab, but then I started doing some research. I realized other authors were getting Mab (the queen of dreams that Shakespeare invented) confused with Maeve (the Irish fairy queen of the Unseelie--dark fairy--court). So, I decided to set the record straight and bring Queen Mab back to her original roots.


Where can we buy the book?

It is available on Amazon, B&N, iTunes, and Kobo. I will also be doing signing in
Los Angeles and San Diego throughout October  If interested, my schedule can be found at katedanley.com.

What tips can you give to us fellow writers?

The best bit of writing advice I have was given to me from my mom via an organizational website called The Fly Lady. The premise is that you can do anything for 15 minutes, be it cleaning your house or writing a book  So set a timer and write.  Fifteen minutes!  That's all it takes! If you write for longer, fantastic. But you are free to get up after fifteen minutes  If you do it every day, pretty soon you'll have a book done  I am also a proud participant of NaNoWriMo (National Novel Writing Month). You commit to writing five pages a day, and by the end of 30 days, you have an entire novel written. Queen Mab started off as a NaNoWriMo book, and while it took me a year to complete the research and edits, NaNoWriMo gave this book its start. If your readers are interested, more information can be found at nanowrimo.org.

And, of course, where can we find you?

The best place is to go to my website at www.katedanley.com.  There I have links to my newsletter, blog, Twitter, and Facebook.  One stop shopping for all your Kate Danley needs!

Posted by Charlie N. Holmberg at 1:00 AM 9 comments