I've gots the cover to The Master Magician primed and ready to go! I'm really happy with how it turned out! And it's green, which I wanted (the first cover drafts for The Glass Magician were originally green).

I kept wondering who my publisher was going to put on the cover. I thought it should be Ceony, but she's on the cover of The Paper Magician already.

In the end, I think the publisher and the artist chose well. 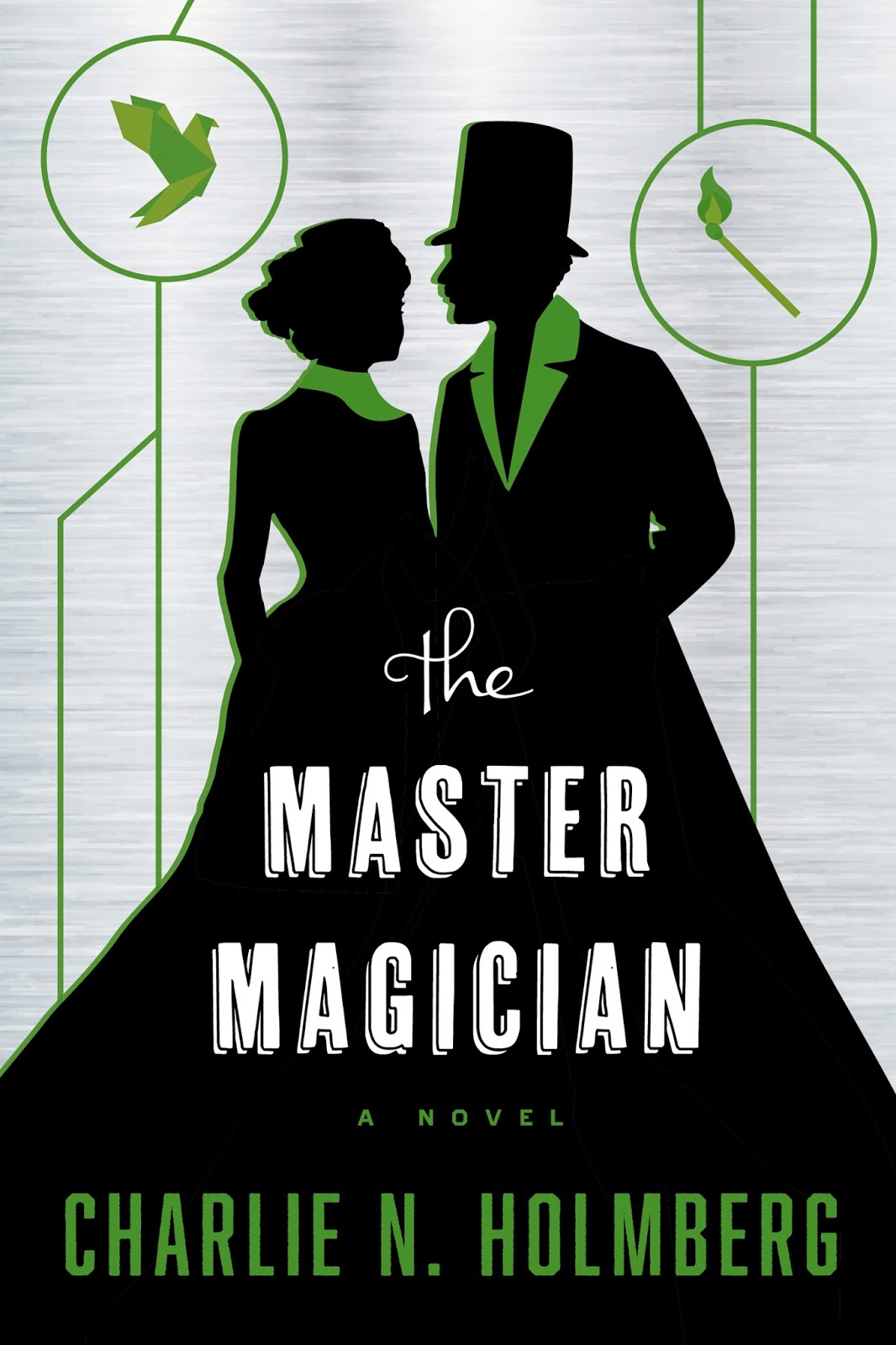 Throughout her studies, Ceony Twill has harbored a secret, one she’s kept from even her mentor, Emery Thane. She’s discovered how to practice forms of magic other than her own—an ability long thought impossible.
While all seems set for Ceony to complete her apprenticeship and pass her final magician’s exam, life quickly becomes complicated. To avoid favoritism, Emery sends her to another paper magician for testing--a Folder who despises Emery and cares even less for his apprentice. To make matters worse, a murderous criminal from Ceony’s past escapes imprisonment. Now she must track the power-hungry convict across England before he can take his revenge. With her life and loved ones hanging in the balance, Ceony must face a criminal who wields the one magic that she does not, and it may prove more powerful than all her skills combined.

Sold! FOLLOWED BY FROST to 47North

I am ecstatic to announce the release of my fourth novel, Followed by Frost, to 47North! This book is a standalone young adult fantasy unassociated with
The Paper Magician series. I am so happy to see this book come into print—to date it’s my favorite of anything I’ve ever drafted.

So, what is it about?  Here’s a short pitch:

After 17-year-old Smitha is cursed to be as cold as her heart, Death himself offers her a chance for relief. Unwilling to give up her life, Smitha seeks redemption deep in the savage deserts, where her perpetual winter dares to make her a hero.

The wait isn’t a long one—the title is currently slotted to come out by summer’s end. Updates to follow!
Posted by Charlie N. Holmberg at 1:52 PM 7 comments

Why Vulcans Are Way Better Than Elves

This was originally posted on Suzanne Johnson's blog as part of The Paper Magician blog tour.

I love to read fantasy. It’s my favorite genre, which is why I write in it. I eat up Sanderson and Marillier novels. At the library, I automatically peruse the books with the little white unicorn sticker on them.

Why do I bring this up? Because both fantasy novels and Star Trek have a race of people who look a whole lot like one another: Elves and Vulcans. However, as both a writer and a reader, I’m going to tell you why I love Vulcans and why I throw most books containing Elves across the room, if I pick them up at all.

Vulcans appear, outwardly, just as humans do, save for their pointed ears and standard bowl-with-straight-bangs haircut (and the occasional blue eye shadow…). Vulcans thrive off logic: their desire to be logical at all times pushes them to learn, making them a highly intelligent race. This encourages them to deny all emotion, which is the bane of logic. They’re also about three times stronger than your average human.

Elves also look like humans, save for the pointed ears. Elves are graceful, beautiful, and immortal. In many novels or media outlets, they even have supernatural abilities. They’re fair to look upon, often war-free, and as Tolkien put it, have “great skill of body.” They’re tall, graceful, and resistant to disease.

This makes me loathe them.

Now, if you’re an Elf fan, that’s fine and dandy—we don’t all have to like the same things. But let me tell you why I root for Vulcans whilst heckling Elves.

I call it Superman Syndrome. (Which apparently is already a thing.)

Vulcans one-up us humans in that they tend to be way smarter than us and could seriously mutilate us in a fist-fight. These are their strengths. But they also have their weaknesses: they don’t fully understand what it means to feel. You rarely see a happy Vulcan because happiness is suppressed. So is sadness, anger, surprise, love. Can you imagine a world without love, where you’re assigned a spouse and only mate with them once every seven years when your body decides to release its entire libido at once? For this reason, I pity Vulcans. Logic is a strength, but any Trekkie knows the episodes where stuffing down feelings ends up hurting Vulcans, not helping them.

When we look at Elves’ strengths . . . well, it’s the whole list, isn’t it? AKA Superman Syndrome.

Superman is my least favorite superhero (I’m a Marvel girl myself) because he’s too strong. The guy is invincible, unless someone manages to get their hands on some psycho rock from another planet, though even kryptonite won’t kill him. I feel it’s the same with Elves. All Elves are gorgeous, all Elves are strong, all Elves are immortal and powerful and smart and limber and nothing else. They’re too perfect; even Tolkien is guilty of this. Where is their weakness? Yeah, you could stab one (when Haldir fell in the “The Two Towers” movie, my first reaction was, OMG THEY CAN DIE?), but you can stab a human, too. Mankind has no upper hand with Elves. We’re just walking meat in comparison, and that, to me, makes elves wildly unsympathetic.
Posted by Charlie N. Holmberg at 12:00 AM 8 comments