The Seam-Ripping of THE GLASS MAGICIAN

I've been doing a lot of adding, and then a lot of cutting, trying to get the sequel to THE PAPER MAGICIAN ready to fork over to Marlene.

First I added a bunch of scenes, but they were so filler and contrived and horrid that I destroyed them.

Then I went through and added a second POV, but it wasn't doing the book nor the character justice, so I've cut all of them but one, which I'm still working on (and will hopefully finish on Monday).

Hopefully I will stop dissecting and organ-transplanting the book by then, and I can move on to my alpha comments and solving the story's other problems. :D With luck, I can get this manuscript to beta readers fairly soon. /whinefest /itisn'tactuallythatbad

(It will probably be a good idea to work on something else before diving into the last book of this series.)

So what are your problems today?

Adding a POV and an Extra Three Pounds

Decided to add a second POV character to THE GLASS MAGICIAN, which will solve a lot of problems with the book. I really think this will only help me (though it will be strange to write from the male protagonist's head!)

THE SECRET PROJECT IS DONE.

This took me longer to finish than I thought it would, due to about six weeks of pregnancy-induced nausea that made me not really want to sit at a sewing machine.

Yes yes, onto it, though we all know you skipped to the picture first.


Every white square on this ridiculously HUGE quilt (about 7.5' by 9', ask me how easy it was to sew this beast together) holds a unique rejection letter from an agent or editor (I believe there are 49 of them). No repeats! (I could have done a whole row on Nelsen Agency rejection letters alone, but I never graduated above their standard, so they have only one square.)

The quilt even includes a rejection from Marlene. ;)

First, only a sucker cuts her own squares. I used a knit (I think it was a knit?) fabric that let me rip 'em instead. Saved time!


Next I had to print out my selected rejection letters on printer paper (had to type some of them up to do this) and cut them out. Imagine my glee when I realized I hadn't gotten iron-on prints, but prints you have to actually sew around the edges. +2 hours of work to this project, at least. 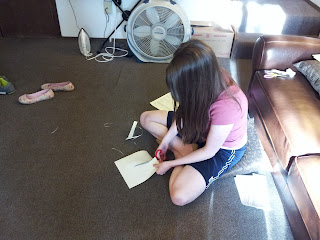 Now, I didn't know this, but there is a TON of ironing involved in making a quilt. Especially when you have an easily-wrinkled fabric and printer ink that needs to be ironed in order to set. 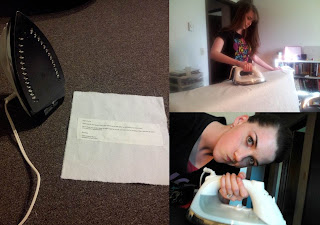 Then I had to lay out the pattern. Pretty simple, white-black-white-black. Though I did organize diagonal rows by rejection letter length. And I ran out of room in my office to lay out the squares. That was fun.

Then I had to sew the buggers together.

So I got a new sewing machine. It came with a CD. So high-tech. 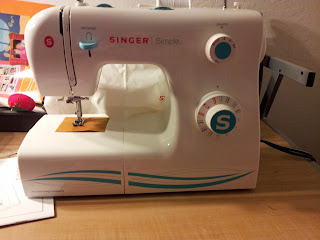 I finished sewing the rows and had to lay them out over the batting and whatever you call the under-fabric. (I am obviously not a seamstress.) However, there was one problem.

I had created a monster.

The quilt was too big to fit anywhere.

So I almost took it outside to work on, despite the fear of creepy crawlies getting stuck in my batting. But then, thankfully, if we moved the table into the corner, the quilt just barely fit in the kitchen.

Then I lucked out and found out that my church actually has a quilting frame in stock. You know, because old ladies like quilting and whatnot. Husband helped a lot in setting that up. Actually getting the huge needle and yarn through the seams required work gloves, pliers, wax, and Pandora Internet Radio.

Then I had to sew up the hole I used to turn the thingy inside-out (uh... see YouTube?) and voila, done.

The quilt is definitely flawed, especially since some of my fabric bunched at one of the seams... but that's okay! You know why? Because it's a QUILT OF FAILURE ANYWAY.

And it will be very warm come winter. :)

SpoCon 2013 Overview and Exercises on Characterization

SpoCon was last weekend, and it was a pretty good place to be! Things got started rather slow, but overall it was a good experience for the following reasons:

I will say I was surprised that I like Super 8 hotels better than the Doubletree by Hilton. They're basically the same hotel, except Super 8 gives you a microwave, free breakfast, and doesn't charge for parking! But it was nice to be able to stay at the actual hotel hosting the convention. Never gotten to do that before.

My biggest suggestions for next year would be to start the convention on time, not in the late afternoon of the first day. I was very, very bored Friday until 3:00 PM. That, and do more with the special guests. The filk guest was hilarious, but I only saw him, briefly, at one event.

To end, I'll post my notes from the last panel I attended, which was on using RPG experience to build better characters. This panel was given by Deby Fredericks.

(Please excuse the formatting, Blogger can only go so far.)

Lesson 1: Every Character Has a Role to Play

*Exercise: Write down principal information on two primary characters and what roles they have

*Exercise: Describe the balance between characters. Power balance, emotional balance. How does the balance shift over the course of the story?

*Exercise: Writer the characters’ background, motivations, and how they bring in their skills to the story.


*Exercise: What skills do the characters need to improve during the story? What skills will they need that they don’t have from the start, and how will they gain it?

·       The story is a finely tuned machine, otherwise it will go up in smoke.
·       In roleplaying, buying skills with “points”
·       Using disadvantages justifies powers and abilities
o   Every character can’t be good at everything
·       Ultra-powerful characters aren’t interesting if there’s no chance that they will lose.
·       It’s crucial that your readers believe your characters can fail.
o   Killing characters (like the Shepherd in Serenity) shows that your characters are vulnerable

Disadvantages can motivate, limit powers, threaten the characters, make things complicated or cause trouble. People can be hunted or have people you want to protect. Some disadvantages are huge handicaps (Like Xavier from Xmen) or small handicaps (like Spiderman's bad luck).

*Exercise: Describe how each character’s disadvantages brought them into the story, and how will they interfere with the plot?

Three years ago today I married this lovely specimen of a man:

AND I WOULD DO IT AGAIN.

Love love love him with all my feelings and organs. 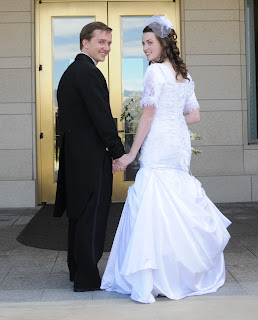 I'll be out gorging myself like a true American today and celebrating the union of TRUE LOVE AWWWW.

(Also, happy birthday to my nephew whose untimely birth on this day made some of my in-laws absent for my reception. No hard feelings, kid. ;) I will always remember your birthday now!)
Posted by Charlie N. Holmberg at 1:00 AM 9 comments

Email ThisBlogThis!Share to TwitterShare to FacebookShare to Pinterest
Labels: anniversary

Update on the Secret Project

And it's taking up my entire kitchen.
Posted by Charlie N. Holmberg at 10:56 AM 8 comments

Some Direction for Pregnant Women with Colds: The OK Drugs

I figure I'd post this on here in hopes that, someday, some pregnant woman suffering with cold symptoms will stumble across here and know what meds she can take without damaging any spawn growing amidst her insides.

Me and a nurse had a chat. Here's what's safe:

I was actually really surprised that I have as many options as that (yes, I have a cold. Wee). I do miss IB Profen, though.

I did ask about Zicam ahead of time, but it's a class C drug--basically no one is sure if it will harm the fetus or not, so it's best just to avoid it. Too bad. Zicam was always #1 in my arsenal.

Having a husband who lets you boss him around and who responds to your bell smartphone app helps a lot, too. :)
Posted by Charlie N. Holmberg at 2:27 PM 8 comments