I have a most excellent guest post for all of you today! Author Terry W. Ervin II has graciously shared his knowledge on participating on a convention/conference panel (bolded emphases added by myself). Pure gold, people. This is a blog post I've been wanting to read, so having the opportunity to actually showcase it on my blog is great!

I've plastered Terry's information at the bottom of the post. Please take a moment to check him out!

~*~
Participating as a Panelist

Literary panels are a staple that attendees look forward to when attending writers’ conferences, fantasy/SF conventions, genre-related events such as romance reader conventions, and book festivals. Usually the panel’s audience is made up of readers or aspiring writers, or writers early in their career. Often those in the audience are both readers and writers.

If invited, or if you must apply to be selected for participation as a panelist, take advantage of the opportunity. Serving as a panelist is a good way to meet readers and fellow authors, and to share your experiences and insights.

Panel topics are determined by those running the event. Genre-based events, such as fantasy/SF conventions, will have panels that cater to the interests of attendees, just as a writers’ conference is likely to have panels focused on a variety of writing-related topics.

As an author, I’ve participated on over sixty panels in various venues and covering a host of topics. Based on this experience, which is miniscule compared to some authors out there, I’ve come up with some suggestions for authors new to the experience such that they can get the most out of being a panelist, while benefitting the attendees—the ultimate reason for the panels.

Before Attending the Event:
Prepare for the topic ahead of time, including a brief introduction of yourself. If the panel is on world building in a fantasy setting, make a few notes to remind yourself of maps, cultures, and histories of some commonly read authors. Maybe read or listen to some interviews (podcasts/YouTube) of those authors.

Dress appropriately. I've seen panelists show up looking like they'd slept three nights in their stained T-shirt and tattered jeans, and a comb appeared to have been a foreign object never to be touched, let alone used. Consider the con-attendees, the topic, and overall event. In general, appearing professional will prove beneficial.

Some panels provide paper tents featuring the participants’ names. If not, some authors bring a bookstand to hold one of their novels.

Do your homework. Know something about your fellow panelists, if you know who they are ahead of time. Being able make relevant comments referencing a fellow panelist's work is polite and demonstrates knowledge on the topic, and that you arrived prepared. It might even earn a few friends.

Prepare a few anecdotes relevant to the panel topic. If the panel is on religion in fantasy, there’s a good chance you are participating since you have some knowledge and experience in that area. Review some novels or short stories written by authors that the audience would likely recognize and use the gathered information to illustrate points during the panel discussion. Do this in addition to answers and comments based on your personal experiences and your own published works.

Just Before the Panel:
If possible, show up a few minutes early. Introduce yourself to the other panelists and the moderator.

Use the restroom beforehand, and have a bottle of water, pen, something to jot notes on, business cards (as mentioned), and a copy of your most recent or most popular novel.

During the Panel:
It's okay to bring a title or two to hold up while introducing yourself, but not your entire series, going into detail of everything you've ever written. (Yes, I've seen panelists have to be cut off after going on about themselves and their writing for over three minutes when asked at the beginning to tell the audience briefly about yourself.) Fifteen seconds should do.

Speak loud enough that you can be heard by all in the room. If there is a mic, use it and be sure to speak into it properly. You may believe your voice carries, but not everyone has average hearing. Plus, background noise, especially near the door/exit, can prove challenging to those trying to hear what you and the other panelists have to say. Maintain eye contact with the questioning individual, while shifting to the audience in general and fellow panelists as appropriate.

Smile, and listen to what others are saying. Appear interested, such as looking at those talking. The audience will be watching. Plus, panels sometimes show up on YouTube. Jot down notes on thoughts that occur to you as you’re listening, and what you’d like to say if called upon, or refer back to if the opportunity presents itself.

If you're an author, it's okay to refer to your works to illustrate points. Do this, however, on a limited basis. Too much can turn the audience off to what you have to say. The panel is not a venue to showcase your published works. Those attending the panel are there to learn while being entertained by the panelists. They’re not there for an author’s “infomercial.”

Answer concisely and avoid “hogging” the panel. When possible, try to answer questions with information that can apply to other audience members with similar questions. Your comments will help/appeal to more people, and will reduce follow-up questions. By doing so, more questions can be covered/discussed.

If you don't have something different or worthwhile to add to the current topic/question and you're called upon, it's okay to say, "I agree with what ______ said about _______." and leave it at that.

Don't be afraid to say "I don't know" or “I’ve never come across that situation” to a question. Causing panelists and those in the audience to cringe while trying to "fake" knowledge on a topic is never a good thing. Chances are someone on the panel or in the audience will correct you. I’ve seen it happen. Even though “corrections” are both appropriate and necessary, they’re uncomfortable for everyone involved. It is okay to say, "I don't know, but if I had to make an educated guess..." and follow up with an educated opinion.

After the Panel:
Thank other panelists and the moderator. If the opportunity presents itself, thank audience members, especially those that contributed to the discussion with thought-provoking questions.

Before departing, take a moment for audience members to follow up with questions they might have. Even so, be aware that conversations might need to be moved to the hall if another event is scheduled in the room right after your panel.

If you have panels scheduled back to back, have business cards handy for folks with questions, and let them know where they might catch you later. Keep in mind that audience members might have something else scheduled right after your panel ends.

Follow up with members of the panel you exchanged business cards with and those that you found interesting. Sending an email after the convention is often effective.


Relax and have a good time. If you’re someone that is hesitant to speak in front of people, know that this isn’t like standing up in front of a crowd all by yourself. You’ll be seated, and with fellow authors there supporting you, and in front of an audience interested in what you have to say. So, take advantage of the opportunity to meet fellow authors and readers that share mutual interests. 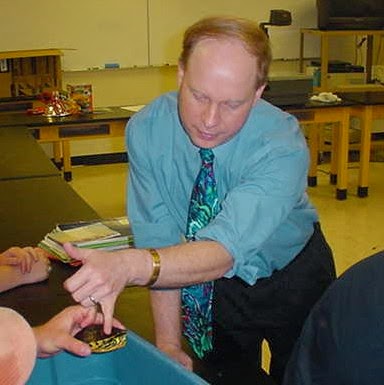 Terry W. Ervin II is an English teacher who enjoys writing fantasy and science fiction. His First Civilization’s Legacy Series includes FLANK HAWK and BLOOD SWORD. The third novel in the series, SOUL FORGE, is slated for release in June of 2014.

His most recent release from Gryphonwood Press is RELIC TECH, a science fiction novel packed with action, adventure, aliens and even a bit of a mystery.
In addition to novels, Terry’s short stories have appeared in over a dozen anthologies, magazines and ezines. The genres range from science fiction and mystery to horror and inspirational. GENRE SHOTGUN is a collection containing all of his previously published short stories.
To contact Terry or learn more about his writing endeavors, visit his website at www.ervin-author.com and his blog, Up Around the Corner, at uparoundthecorner.blogspot.com

Posted by Charlie N. Holmberg at 1:00 AM