I can be a little bit of a health nut. I wish I were health-nuttier, to be honest, but at present I'm health-nutty enough that most of my friends roll their eyes at me when I won't eat a donut. That counts for something.

I also really, really like food. Call me American, but eating really is one of my FAVORITE past times.

I'm also a woman. Therefore, I like chocolate. A lot.

I frequently peruse the Interwebs in search of "healthy" dessert recipes (vegan recipes, in many cases. though I am hardly vegan.) The best healthy dessert I've ever found is Lauren's Healthy Chocolate Cake with a Secret, which I frost with her peanut butter cups recipe.

More recently I discovered Chocolate-Covered Katie. Katie has a smorgasbord of dessert recipes, though since she had far less of a sweet tooth than myself, her recipes tend to be hit-or-miss. (For instance, I didn't like chocolate peanut butter fudge, but her sugar-cookie milkshake was pretty good.)

(I was in a cookie-dough mood, what can I say?)

First we made the truffles. The recipe says to form the dough into balls, but that dough was no where near solid enough for that! We put it in the freezer for a while, but in our impatience we just ended up plopping slightly runny, slightly chilled dough onto some foil and spread chocolate over it. (We used the peanut butter cups recipe mentioned above for the chocolate.)

So yes, they were ugly. And I took this picture on my dumb phone (as opposed to smart phone), so they look even uglier. 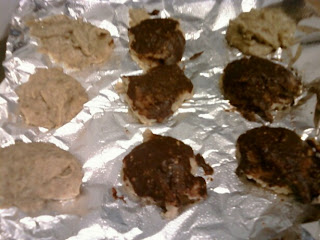 However, these were pretty darn good. I dare say very good. I can almost believe there was cookie dough in that cookie/truffle/thing.

While the truffles chilled in the fridge, we made the pie, which took a lot more effort and a run to the grocery store for dates. I believe there is a version of this pie with sugar, but we chose to go sugar-free, and the recipe is completely vegan. (Though we used real chocolate chips!) 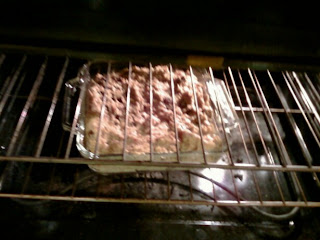 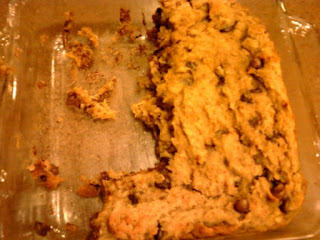 The verdict? I wasn't crazy about it--tasted too much like beans to me (it has two cans of white beans in it), though Wendy and her brother thought it was pretty good. I was surprised--since this dessert had REAL chocolate in it, I thought I would like it more. Overall, Wendy and I both preferred the truffles.

Posted by Charlie N. Holmberg at 9:00 AM